Miroglio Architecture + Design is a small, intensely design-oriented architectural firm, founded in 1993. Based in Oakland, California, the multidisciplinary firm was established with the intent to provide complete, high level design services for the full range of projects within the built environment, including residential, commercial, and institutional projects. 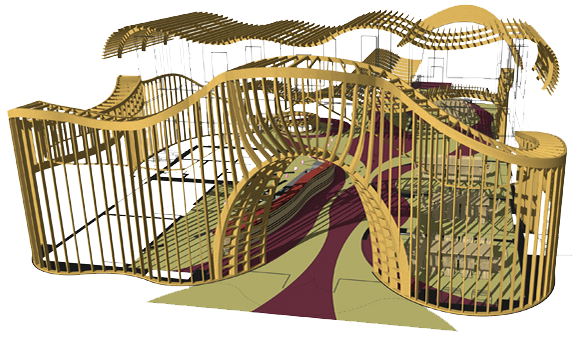 M.a.+d. also designs furniture, lighting, and graphic art. In their buildings and interiors, M.a.+d. practices an idea-based design process, wherein a central Idea, derived from the project brief, informs design decisions throughout the project. The process has resulted in projects which, while contemporary, defy easy stylistic classification. M.a.+d. has been honored with over 35 international design awards, and was recently included in the book Architects 2000, a compendium of the leading architects in the world. Miroglio Architecture + Design was one of a select few North American Architects invited to show its work at the 2006 Quito Design Biennale in Ecuador.

Joel Miroglio, principal and founder of M.a.+d. completed his undergraduate studies at Cal Poly University in San Luis Obispo, California, and continued his education at Yale University, where he was awarded a Graham Foundation Grant for furniture design, and obtained a Master of Architecture degree. Following graduate school, he was awarded a Fellowship for study in Rome, Italy, where he attended the University of Rome, and undertook an independent project to study urban morphology. He was recently inducted into the Justin-Siena Hall of Honor.

M.a.+d. has completed a variety of projects throughout the United States. Their projects, including both residential and commercial, have been featured in national and international publications and books, and their drawings are included in private collections on both coasts. M.a.+d. furniture has been featured on the Discovery Channel Program Knowzone.

Recently named one of the top twelve most exciting design firms in the world by DDI magazine, Miroglio Architecture + Design is an architectural firm dedicated, simply, to the pursuit of design excellence.